From the Wembley Wizards 1928 to 2018, passing by the 1978 World Cup team or the 1967 Wembley Wizards, here's the Scotland football national team History through a good dozen of lineups. Fourteen precisely. 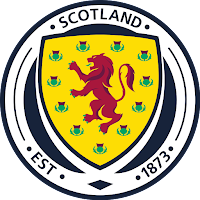 Thus, we will pass on the era from 1872 - and the first international football game ever* - to the 1880s when the Scotland team dominated the England team.
*: 30 November 1872 at Hamilton Crescent, Glasgow, Scotland vs. England, 0-0. The Scottish team consisted in 11 players of Queen's Park. 9 clubs were represented in the England XI.
England started to have their say by the end of the 1880's and we jump to that 1928 year.

1977 : 2-1 win at Wembely for the men of Ally McLeod over the men of Don Revie. It was in June. Scotland was qualified for the next World Cup and not England, like in '74.
England 1, Scotland 2 (McQueen 42', Dalglish 60', Channon 88' pen.).
Macari replaced Jordan for the second half. Gemmill came into play instead of Masson at the 87th minute. Masson had that mixed-role of covering plus, at times, taking the right side. McGrain could take this wing too.
Not really a great match. This match is most of all remembered for the pitch invasion at the end of the match and for the incidents outside of the stadium before and after the match.


1978 : the Scotland XI that beats The Netherlands in the 1st round of the World Cup (3rd game of the first group stage).
Scotland 3, The Netherlands 2 (Dalglish, Gemmill x2 incl. 1 pen.).
In '78, Dalglish was more often seen on the right side of the pitch.

1986 World Cup, in Mexico : two losses by 1 goal margin and one 0-0 (with Uruguay), for three different formations and lineups so it is difficult to pick one. Right midfielder Strachan stood out. As an indication, Leighton was in the goals.
The squad of Alex Ferguson was composed of McLeish and Miller of Aberdeen, Gough, Souness, Nicol, Nicholas, Sturrock and Bannon of Dundee Utd, Archibald, Narey, Albitson, McStay, Sharp and Cooper. And MacAvennie. Thus, all the players with at least one appearance during this World Cup are cited.
Manager Jock Stein had passed away having suffered a heart attack during Scotland’s qualification match against Wales.

Italia '90 : eliminated in the first round as one of the two worst 3rd of group with Austria. 1 win over Sweden though.
Here's the lineup that beat the Swede by 2-1 (McCall 11', Johnston 81' pen., Strömberg 86'). McStay came in at the 75th minute for Durie and McCoist replaced Fleck at the 84th minute.
It was the second match, after the 1-0 loss to Costa-Rica and before the 1-0 loss to Brazil. With McCoist as the starter at the centre forward position this time and Mcstay instead of Durie. And McKimmie instead of Levein.
Ok let's change of idea : here's the XI that played against Brazil in the last match.
A indications at last : Richard Gough and McInally started againt Costa-Rica but never played again. Gough was out after one half-time.
Back to the game against Brazil, Gary Gilespie replaced MacLeod at the 36th and Fleck came in for McCoist at the 79th minute.
Mo Johnston was turning around the centre forward, drifting on either the left or the right side of the attack. Johnston has had a chance to equalize, what would have qualify Scotland.

Euro '92 Sweden : 2 losses with the same starting-eleven in two first games and 1 win in the last game against C.I.S with a slighlty modified lineup with Kevin Gallagher instead of Durie in alongside McCoist and Tom Boyd for Malpas. 3-0 (McStay, McClair, McAllister pen.).
Gallagher made two appearnces from the bench before this game. Pat Nevin came in from the bench two times (Germany in game 2 and C.I.S). Duncan Ferguson once in the first game and Jim McInally once in the last game.

Euro '96 England : 1 draw with The Netherlands, 1 loss to England, 1 win over the Swiss.
Here's the team that grabbed a win in the lst game (1-0, McCoist). McCall and McKimmie had played in the two first games. McKinley had played as right midfielder agaisnt England in front of McManaman.
The pair of strikers that started against England was Durie-Spencer and it was a the triplet of strikers against The Netherlands with Durie, K. Gallagher and Booth.
Before that game against Switzerland, Burley had appeared twice from the bench.

1998 World Cup in France : the starting-eleven of the two first games.
Opening game, Brazil vs Scotland : 2-1 (César Samapaio 5', Collins 38' pen., Boyd 74' o.g.). Scotland vs Norway : 1-1 (H. Flo, Burley). The last match was a 0-3 defeat to Morocco.
Goram who was in concurrence with Leighton since years was dropped fro mthe team a couple of weeks before the start of the tournament.

1999 : 1-0 win at Wembley (Hutchinson 38') during the Euro qualifiers. Referee : Pierluigi Collina.
Notes : Hutchinson was usually layed at midfield (like in the first leg match) but here was played at the centre forward position. McCann assisted Hutchinson's goal with a cross from the left side of the pitch.
Sub. : Burchill for McCann at the 74'.

2018 World Cup qualifiers : after a difficult start, the second part of Scotland's campaign in the Group F is positive. Scotland almost beat England at Hampden Park as their leading by 2 goals to 1 at the 90th minute (thanks to Griffiths two free-kick goals, 87', 90'). Almost, as Kane scores an equalizer in injury time.

Scotland earns 10 points in 4 games after that but it's not enough to take the second place to Slovakia that doesn't qualify as 'best second of group' to the second qualifying round or 'play-offs'. A Scottish win over the English would have permitted that to the Tartan Army - as they would have had 14 pts, not 20, the games against the last team of the group being discarded.

Substitutions : James McArthur for James Morrison at half-time, Ryan Fraser for Robert Snodgrass at the 67' and Chris Martin for Ikechi Anya at the 81st minute.