That video is all about the goals Platini scored on the European stage. That is the topic in what concerns the serie "European Nights Goals". So no assists or any other plays. Only this specific aspect of his game here and in the particular context of the European Cups matches.
It is 25 out of 28 his goals, shown in chronological order.

This retraces well his career. What a "strange" career so to speak or to say the least. The affairs in Saint-Etienne then of course his move to Juventus, the Heysel. It ends with a goal scored in Iceland when he played on one leg. The end of his footballing career. That said, what a player! But what a strange, spooky career too wich has continued and is still now continuing in the corridors of power as it is impossible to not know. I mean, did this guy sign a pact with the devil? Remember his 9 goals at the Euro 1984 too. What do you think? Yes he did. And yes, for real.

Now his records foundable on rsssf (contrarily to the ones proposed here and only here). The sign * indicates the goals that do not appear in the video.

UEFA Champions League Final Man of the Match Award (since 2001)

It is well-known that Football is the most individualistic sport amongst collective sports. This is true.
And despite the fact that football is a sport that is played collectively, it seems there is always the need to extract one piece out of the 11 pieces puzzle. UEFA is not here to work things out on this point of view since they created the "Champions League Final Man of the match" award in the beginning of the century, in 2001. This was first awarded to Oliver Kahn, hero of the penalty shootoots between his team of Munich and Valencia after a very solid match (by him and from the both whole sides).
It remains that the "palmarès" can be an indicator of who was maybe the iconic player of the winning team (the loosers have never been awarded here) like Gerrard, Maldini or Xavi, that globally during the competition, during the Final or both things. Also he can be the most decisive in terms of goals scored (Eto'o, Inzaghi, Milito...), the most spectacular (Zidane, also scorer, Kahn in some ways) or a bit all of that at once.
Of course some (or all) choices are debatable and the "fans" had their say until recent days.
Here is the Palmarès of the CL Final "MoM's" by UEFA, some guys who vote: 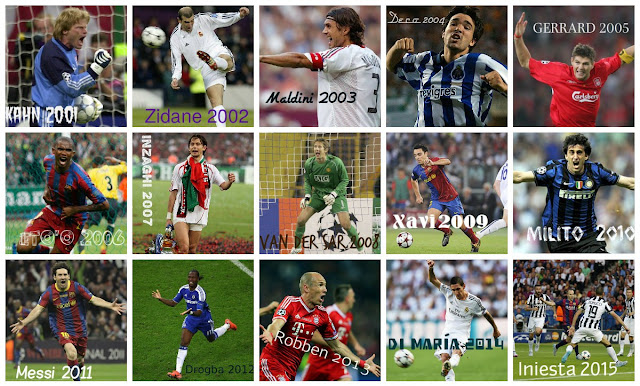 UEFA CHAMPIONS LEAGUE FINAL MAN OF THE MATCH AWARD (since 2001):

Notes:
Yug. '60 and U.S.S.R '64: player 1/ player 2 = usual starting player/ starting player for the Final.
Yug. '68: Osim missed the Final (match replayed by the way so the 'Petkovic/ Hosic').
CCCP '88: + the Belarusian Gotsmanov who played the Final.
Portugal 2004: + P. Ferreira, R. Costa, N. Gomes and Simao at disposal.
More explanations about the lineups by looking at them by country (see index). 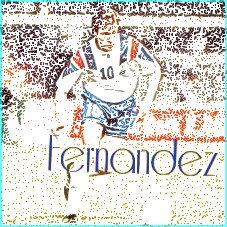 
Canada 86 (cross to Stopyra who deviates the ball for Papin) - Italy 86 (Fernandez for Rocheteau, Rocheteau for Platini, all of that in the axxis).

France 1934, Beaten by Austria in the First Round of the World Cup. In Italy.

France 1960, 4th of the European Nations Cup held in France.

France 1984, Winner of the European Nations Cup. At home.

France 1996, semi-finalist of the Euro held  in England.

France 2000, winner of the Euro Championship held in Belgium and in The Netherlands.

France 2006, runner-up of the World Cup held in Germany.

France 2014, quarter-finalist of the World Cup held in Brazil.

France 2016, runner-up of the Euro Championship on home soil (with subs as in the Final).

Eng + Fr
That's mine. Its base is a four-men defence composed by the 4 classiest defenders. All centrals (even if Bossis on the right is no deluded choice at all since he started his career as a LB, then played on the right in 82 then became a libero in Nantes while he became more the stopper for France a bit later). Trésor, it is not always remembered, started his international career as a LB, even if libero in club so...why not? It is a virtual team after all and once again I wanted the defenders that stands out, that on the two following points: in technique and in leadership. Without forgetting the defensive skills of course but that is not what can really make the difference exception made of Desailly maybe. Probably the best French defender ever in what concerns to mark an opponent (and with a very good general technique too).
Now, the midfield. And attack. The midfield is in my opinion a no-brainer (let see what Pogba will do better than them, how his game can evolve, or not). In attack, Fontaine for Henry is maybe the controversial point. Papin had his word to say too.
And the keepers? Keepers is grand family and if Barthez is not the father of it, sure he is the best son's.


France 2001, winner of the Confederation Cup

France 2003, winner of the Confederation Cup


Finally a few notes:
We must cite "additional players" for some teams:
1966 team: + Combin, De Bourgoing (Argentine-french) and De Michèle to be complete about all the players used for the 3 games. De Michèle played the first match.
1984: + Amoros and Genghini.
1996: + A. Roche, Pedros and Lamouchi.
1998: + Leboeuf in Final (for Blanc, suspended) and the young ones, Vieira, Trezeguet and maybe most of all Henry.
2000: + Pirès and Wiltord.