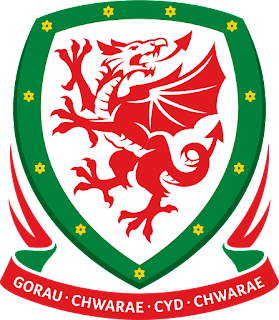 The Welsh national football team only qualified for two final tournaments in its History (1 World Cup and 1 Euro) but did fairly well each time by reaching the quarter-finals of the 1958 World Cup in Sweden (elilminated by the eventual champion Brazil) and even the last-four of the Euro 2016, in France (eliminated by the eventual winner Portugal).

Here are these two legendary teams that more than half a century separates.

Wales at the 1958 World Cup
1st Round :
Hungary - Wales : 1-1 (J. Charles)
Mexico - Wales : 1-1 (I. Allchurch)
Sweden - Wales : 0-0
Wales - Hungary : 2-1 (I. Allchurch, Medwin)
Quarter-finals :
Brazil - Wales : 1-0
The OR-IR pairing was Webster-Medwin in the two first group matches against Hungary and Mexico then Vernon-Hewitt in the third match against Sweden, Medwin-Hewitt in a fourth and decisive group match against Hungary and Medwin-Hewitt again in the quarter-finals.
John Charles missed the quarter-finals and the match against Brazil (0-1 with a goal by the 17 years old phenomenon Pelé). Webster was his substitute to fill the centre forward role for this match.

Wales, Euro 2016 Semi-finalists (winner of Belgium in the quarter-finals then eliminated by Portugal in the semi-finals).

Collins took the centre of the defense when he had to replace Davies when the latter got suspended (and Williams, usually in the middle, took the left hand of the defense). Arsenal's Ramsey was suspended for the semi-finals and was replaced by King in this occasion.

We'll finally take note that Wales was "quarter-finalist" of the Euro 1976 when the finals still consisted only in the semi-finals, the little final and the final. They had qualified to this stage of the competition by topping their group ahead of Hungary, Austria and Luxembourg and then were eliminated by Yugoslavia (0-2 loss away in Zagreb then 1-1 at Ninian Park in a bad-tempered match).
The team included the likes of Mike England (the centre-half), Leighton James (winger), Terry Yorath (the midfielder of Leeds) or John Toshack (the centre forward of Liverpool).

The 50's are widely considered as the golden age of the Welsh national team and an outstanding player of the time but who was born too early to be part of the 1958 team was the wing-half Ron Burgness, of Tottenham.

From 1976 to 2016, the Welsh only knew some punctual successes of prestige. You can consult this section of the national team's wiki page in order to spot them as a start. And also to figure out who are the other noticeable players in the team's History (consulting the whole article).
You'll also certainly find some interesting websites in order to know more.

As announced, the point here is just to hughlight the most successful teams and to offer the list of the national team's top scorer by year and here it is now, as for the second part of this article, here.