Japan Lineups at the World Cup

Japan football team lineups at the World Cup with all results and scorers.

Omura played in the last match instead of Nakanishi. Against Argentina, Nakanashi was often defending in the RCB zone. A couple of last notes : Soma was very attacking and the two main offensive players coming from the bench were the striker Wagner Lopes and the midfielder Hirano (the first named came in each time, Hirano did not play in the second match).


2002 : round of 16 at home in a tournament organized joint with South Korea (each country have played all their games at home). 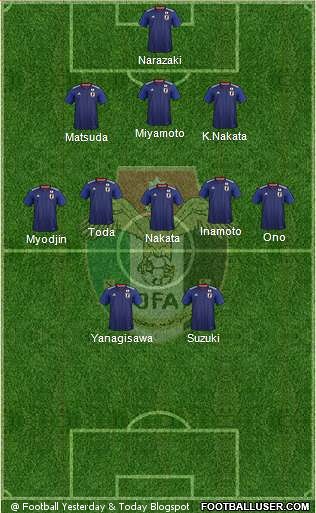 The duo Yanagisawa-Suzuki was replaced by the duo Nishizawa-Alex in the round of 16 against Turkey. For the same effect : no goals scored. Suzuki replaced Alex at the half-time. Nishizawa played the full-time and Yanagisawa did not play.
Back to the group stage, Miyamoto replaced the captain Morioka in the vey first game at the 71st minute at the heart of the defense and took the armband as well since then for the rest of the competition. Miyamoto played wearing a mask. Myodjin did not play this very first match but took the spot of Ichikawa right after. The latter reappeared in the second half against Tunisia  (assist to Nakta) and against Turkey as well but had to leave the pitch at the 86th minute. He was then subbed for Morishima, a midfielder who was the main player of complement in the squad.
The veteran striker anf first goal scorer ever for Japan in the World Cup Nakayama appeared once for 20 minutes against Russia, instead of Suzuki when it was 1-0 (since 20 minutes).
As for Kawagashi, he could not play in the goals as he had broke his leg. 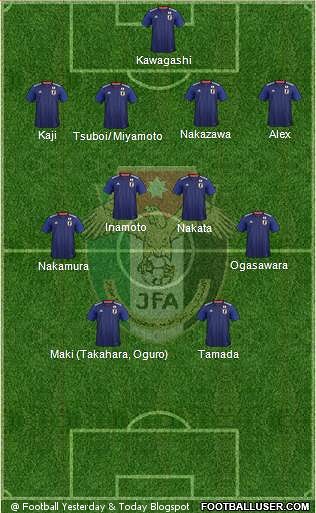 The lineup of the game against Brazil which also constitutes a good synthesis-11. More precisions right after the drawing.

Note however that Yanagisawa was the starter in the two first matches; Tamada replaced him since the hour of play against Croatia. Maki made his only apperance against Brazil before to be subbed out for Takahara at the hour play, the latter being subbed out his turn after only 6 minutes of play for Oguro. Takahara-Yanagisawa was the starting front-two in th two first matches.
Also, Imamoto integrated the team at the half-time of this same match against Croatia instead of Fukunishi. A last, Alex was the LWB/ LM in a 5-3-2/ 3-5-2 against Australia with Komano on the opposite flank and Tsuboi RB next to Miyamoto who played in the two first games but was suspended for the match against Brazil. Tsuboi did not play against Croatia as RB when Japan played in a 4-4-2 but it was Kaji, who did not play against Australia. Tsuboi replaced Miyamoto in the centre against Brazil whilst Kaji kept his spot on the right in the same formation used against Croatia, a 4-4-2. 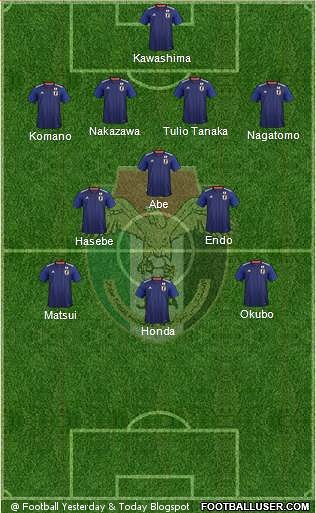 Notes: It was the same eleven for the entire competition. The forwards Okazaki, Tamada and the offensive midfielder Nakamura came from the bench against Paraguay like before against The Netherlands.
A last thing, the two first goals against Denmark were scored on free-kicks with that damn Jubilani.
Also a little precision : Okubo was not really a left winger in the classic sense. He was not really a dangerous striker neither. 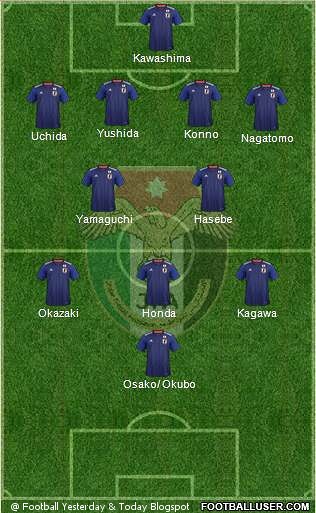 
Morishige was the starting player alongside Yoshida in the very first match before to be replaced by Konno for the two other games. Yamaguchi was replaced by Aoyama for the third game but replace him during the match, at the hour of play. Okubo started on the left in the second game and was replaced as CF when Kagawa entered instead of Osako. In the first game, Okubo had replaced Osako around the 65th minute. Endo appeared twice from the bench, in the two first matches. 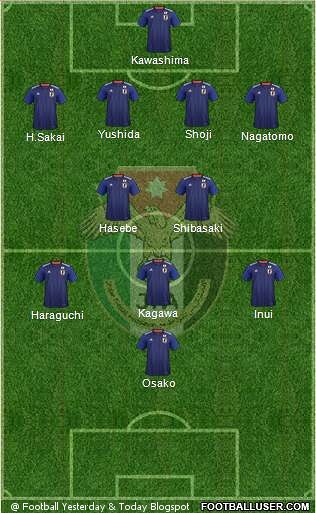 The team was modified only at the occasion of the third group stage match.