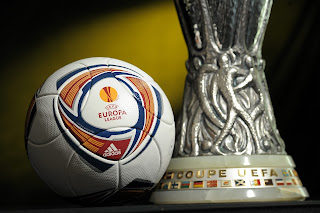 VFB Stuttgart 1989, 1st leg match: the team started as follows on the picture placed on the left before adjusting to the formation as presented above (presented again, on the right here).
The changes have been operated after 12-15 minutes of play as the Napoli's team was clearly dominating. Not dominating in a ultra-spectacular way even if at times...the foreign trio Alemao-Maradona-Careca...but first, tactically so there has been some changes during the first half, in different succesive little steps as for who marks who in a first time before to find a defenitive collective solution as shown previously (and now, once again, on the picture place on the right). With N. Schmäler who transformed from a quite offensive right-back to a right-midfielder with the mission-double to block or even completely prevent the attacks of the left-back of Napoli, Francini, and to cover Schäfer, initially a marker in the first fifteen minutes who became an attacking right-back. Thus, Francini was less seen. Hartmann was at the marking of Maradona. Katanec was a more rotating midfielder who dealed quite a lot with F. de Napoli in particular, him who neither always was on the same side of the pitch even if he preffered the right side where there was Schröder in front of him, a left-back who could attack a bit too (less in the second formation). In central defence, Buchwald was the stopper while Allgöwer was an offensive libero, builder of the play that from the start until the end  of the match (or during the biggest part of the match, Allgöwer had to calm down in the last minutes). But in two different global configurations.
So VFB who started in a 5-2-1-2 with two offensive side-backs (practically side-midfielders, almost) has seen his formation be mutated in more of a 4-4-2 (with the n°10 Sigurvinsson making the number at midfield when needed). A special 4-4-2 with that system on the right (Schmäler who locks the right wing/ right hand of midfield of his team with Schäfer eventually attacking from a setback position, placed just behind the first). That even ended in a 7-2-1 with the entry of Zietsch, a defender, instead of Walter, forward-player and with Schmäler and Hartmann more and more glued to their back-line. That was the last 20 minutes of that 1st leg match, played in Napoli, 2-1 for the locals.

In the 2nd leg match, VFB also did an adjustment after a few minutes. Same thing with Schmäler and Schäfer again but in a different system akin to that team of Hamburger SV of the early 80s with Schäfer in the role of Kaltz after he had started again as a marker (due to his speed surely, in order to stick to Careca's or even Maradona's runs even if this one knew a clear decline phyisically since some time, maybe a long time actually). VFB was at home, the goal was not to block everything this time but to win the game. By the way, Klinsmann was back into the attack (and Gaudino found again a role of midfielder, positoned on the left). Important loss for VFB, Buchwald. Him who was of all the duels in the first match.
Napoli opened the score and Stuttgart always ran after it so it benefited to the visitors who leadt 3-1 after one hour of play. Final score 3-3. 5-4 on aggregate for the Neapolitans. Two legs that were totally mastered from them.


Now, some notes about Torino '92: the following starting formation for Torino (picture placed on the left) in the 1st leg match played in Stadio delle Alpi can seem strange enough. And it is. In the first minutes, the Italians were totally lost on the pitch due to van Gaal's Ajax formation and tactics, one of the variant of what Ajax Amsterdam and the Hollandese team proposed in the 70s and never stopped to deploy since exception made of the National Team the last World Cup. Torino, on his side, had no clear scheme, a mix of  4-5-1 and 4-4-1-1 with a zest of the "zona mista" stuff but not really.
Like Stuttgart against Napoli in 1989 the first step for Torino was to know who mark who and to make some changes on this point. They started trying several combinations after Ajax made the first goal of the match (17'). Until then, Scifo was forced to defend on the right side for example. The goal was a long-range shot of Jonk but make no mistake, the main problem was to block the sides were the ball had been lost again just  before that terrible shoot .
Since around the 30th minute, it went progressively a bit better for Torino (even way better in spite of Ajax always had the edge in many aspects of the game but the match was more balanced though) now with Bruno as a right-midfielder, Mussi left-back/ left mid' (with still, the possibility for him to play quite high on the pitch when possible as he did previously in a mixed-role of DM and LM, Vasquez remaining central) and with Lentini now even more free than before to play on either side of the pitch becoming more of a second striker turning around Casagrande. Also Benedetti's and Cravero's respecitve main zones of intervention changed (centre right-hand, centre left-hand, it became more the opposite).
So it resulted in the organization presented above and that will be now presented again in comparision with the fomation of the very start of the game.


Final Score of the 1st leg match, 2-2 with two goals by Casagrande in the second half. Torino finally found a coherent way to play this very important game. Very often a decisive one if you believe the specialists in football especially when it is about the European Cups Finals. Ajax has now a big advantage with two away goals.

In Holland, Torino adpated even more to the game plans of Ajax with lines of three men. However, maybe the team had a insoluble problem of unbalance with the pairing of the star-players Scifo and Vasquez who were very similar and often tend to operate in the same zones of the pitch. Well not completely insoluble given there is still the possibilty of removing one from the team. And that is what happened with the replacement of Scifo in the final game after one hour of play he who was moreover, probably not in sufficient shape top play a so demanding match. Torino had occasions then. That was the last chances, a Mussi's shot, him who had multiplied on the pitch, hitted the post, same fate for Sordo...0-0. The team in the garnet jersey could have won, they had the opportunities, it was globally close between the both teams in the end despite the very sophisticated systems of play and the very dynamic players of Ajax (Ajax in his stadium had several occasions to score too of course) but the 1st leg would have been effectively decisive with that preventable goal scored by Pettersson on penalty-kick*.
Torino did not lift the trophy even if not defeated and van Gaal marked his territory.

*: consecutively of a collective work of Annoni and Benedetti who irregularly stopped a not really twirling Bergkamp, founded by Jonk - the only thing that Bergkamp managed to do in that match, to obtain this penalty. Helped well by a magnificient pass by Jonk. Bergkamp did not play in the 2nd leg. Neither did Annoni.


A last note. About Girondins de Bordeaux '96: in the first match, played in Munich, the duo Croci-Grenet, on the right side worked on the same mode as Schmäler-Schäfer of VFB Stuttgart '89. With Croci in the same role as Schmäler; right-midfielder in order to protect this wing and to cover his teammate place behind him who has the role of an attacking full-back, Grenet. In the same role as Schäfer. In the second leg, Bancarel, normally a striker, played instead of Grenet.