Foreign players of the French League profiles (up to 1960)

In November 1960, France Football (in his monthly supplement Football Magazine) makes the review of the foreign players of the French League since 1910.

The English men arrived in France with football. In a first time in the North, Milner and Farnfield in Calais, Peacock in Roubaix, Owen, Bowman, Six in Lille, Turner and Mathey at Racing. Then they invaded Languedoc : Gibson, Martins, Parkes, Harrisson, Cornelius, Barrett, Hewitt at F.C Sète. Afterwards, the British men were represented in Cannes by Aitken, at Stade by Bunyan, in Boulogne by Newell, in Lille by McGowan, in Rouen by Barnes, in Sochaux by Leslie and at R.C Paris by the small and slick Kennedy.

The creation of professionalism in 1932 attracted lots of Hungarian footballers in France. Let's enumerate them : Bukovi and Lukacs (Sète), Kalmar (Roubaix), Berkessy (RC Paris), Kalocsaï and Moré (Lille), Kohut and Eisenhoffer (Marseille), Szabo and Bradac (Sochaux), not counting the Magyars who were naturalized. The most of these players brang to their French partners the model for a perfect technique.

There was also several Yugoslavians. Like the English men, they most of all reinforced the Languedocians clubs : Sekulic at Montpellier, Stefanovic at Sète and Yvan Beck, the redoubtable gunner at Sète.

The Helvetian football provided the three Kramer brothers to F.C Sète then at Montpellier. Came after them the goalkeeper Séchehaye at Club Français, the centre-half Bruhin at Marseille and most of all the matchless inside of F.C Sochaux Trello Abbegglen. All were players with exemplary consciousness and correctness.

DUTCH GOALSCORER Pic : BACKHUYS (Metz)
He was the only marking Dutch man (if we can say) in the pre-war era. His shooting (foot and head), his efficiency, were as famous as his long legs and his protruding ears. He was the star of the team of Metz which was runner-up in the Cup in 1938.

After the Wunderteam men Jordan and Hiden (who became French), with Henri Hiltl, imposed himself at Roubaix Jerusalem, the stratege with receding hairline and with the Viennese touch of the ball.

GERMAN PUNCHER Pic : Ossi ROHR (R.C Strasbourg)
The R.C. Strasbourg's centre forward, Ossi Rohr, was, with the Marseille's back Schnoeck, one of the rare German players to bring something to French football. His athletic power, his energy, his shots, were impressive.

Iberian football was more generous pre-war than after. The first Spanish who came to France was the back of Racing Anatol. Then there were afterwards Balmanya and Escola (Sète), Zabalo R.C Paris), Mancisidor and Urtizberea the ox (Girondins de Bordeaux). We'll join to them - by style affinity – the Brazilian Vasconcellos (Marseille) and the Uruguayan Diaz (Red Star).

Now, and before to continue the review, we can read the following insert on the first double-page :

French football, in general, and the French National Team, in particular, often felt well to welcome naturalized players. They were numerous, indeed, to settle in our country and to choose France as motherland. Let's recall the most famous cases.
Pre-war, those of Anatol (Spanish), Yvan Beck (Yugoslavian), Désiré Koranyi, André Simonyi, Kaucsar, Siklo, Weiskopf (Hunagarians), Hiltl, Jordan and Hiden (Austrians).
And post-war, those of Lechantre (Belgian), Skiba (German), Ujlaki (Hungarian) who were internationals, of Gonzalès (Argentine) and Andersson (Swede) who almost been.

And this one on the next double page :

In Italy, we call them « oriundi », that is to say of Italian origin. In this way the Monti, Schiaffino, Lojacono, Julinho, Sivori, Angelillo could reinforce the calcio. In France, these footballers of French origin (by their parents or grandparents) were Uruguayans before the war and Argentines after the war.
The most famous French-Uruguayans played at Sochaux : Cazenave, Duhart (both internationals), Irrigaray. There was a French-Argentine as well at Sochaux : Lauri. Today the French football is invaded by the players of French origins who were born in Buenos Aires : Gauthier (Nancy), Combin and Rambert (Lyon), De Bourgoing and Dandru (Nice) and Muller (Sochaux).
A particular case : the one of Roger Courtois, born in Lausanne, but who was a French international because endowed (like his teammate Lehmann) with the double-nationality.

The Austrian national team of the years 1951 to 1954 provided a strong quota of players to French football. If Melchior was one of the rare shock elements imported from Vienna, numerous were the the Austrian artists who gave lessons of technique, in this way Decker (Sochaux), Habitzl and Aurednik (Lens and Le Havre), Schlindlauer (Angers, Nantes), Happel (R.C Paris), Stojaspal (Strasbourg, Béziers, Troyes), Brinek (Monaco).

The Argentine footballer seems destined by his technical and moral qualities (excellent mentality), to the role of professor or of boss. We can't deny the influence and the so valuable role of model that had Carniglia at Nice, Aballay and Vega at Nancy, Verdeal at Valenciennes, Conti at Monaco, Sosa at Racing, Di Loreto at Toulouse and Le Havre, Lorenzo at Nancy ; personnalities that Muro still has at Nancy as well as Ruben Bravo at Roubaix (after Nice, Aix, Grenoble and Rouen).

There was also from the Danes an unquestionable technical supply. The technical fineness was the essential quality of a Christiansen (Lyon, Le Havre, Grenoble) of a Jensen (Lille, Marseille, Lyon, Troyes), of a Soerensen (Stade), of a Hansen (Nancy) or of a Bronee (Nancy). But there was also the inexhaustible Mathiesen (Stade, Le Havre) and the efficient Nielsen (Marseille).

Neighbours and friends, the Swiss people have made frequent travels to France. It is true that they most of the time benefit of the double-nationality. The three best Helvetian footballers imported were three forwards, internationals in their country, small by height but vivacious and deft : Tamimi (Lyon and Saint-Etienne), Fatton (Lyon), Eschmann (Red Star, Marseille, Stade).

Of the three Finnish who came in France, only one did not impose himself (Rykberg at Toulouse and at Sète). He was the lumberjack. The two others made a brilliant career thanks to their subtile touch of the ball and their sense of the game : Rytkonen at Toulouse, Lehtovirta at Red Star.

Before ending this part, here is now a new insert which is about players from other coutries :

//////
There was, of course, many other transferts of foreign players post-war. It would take too much time to enumerate them all here. There was more than 400 ! Let's recall simply the well-known and the more unexpected.
////////

BRAZIL – Yeso AMALFI (very big pic : in contrast with the Melchior's pic, Amalfi is here about to strike the ball, in a perfectly balanced position of the body, with his arms well outstretched. It seems that he will use totally or partially the outside of the foot, the left. His right is a bit far from the ball though. It remains a bit special. In the end, on this pic, of course, nothing reveals if what he is doing is great or poor, it can be either way and we'll never know. But the main idea which is about elegance is here and let's say that it was an incredible action).

The Brazilians expatriate less than their South Americans colleagues. In France they were rarer; the most marking was Yeso Amalfi (Nice, Racing, Marseille, Red Star), whose the technical virtuosity was rivaled by only his fantasy. With him, let's cite Brandaozinho (Monaco) and Zeglio (C.A.P).

All the Dutchmen who tried their luck in our home before the establishment of the professionalism in Amsterdam and Rotterdam, did well. There was amongst them a mix of tempers and a clear distinction between the fighters (De Vroedt at Le Havre, De Kubber at Bordeaux, Van der Hart at Lille, Vreken at Nantes, Van Geen at Nantes, and most of all Appel at Reims) and the artists (De Harder at Bordeaux, Timmermans and Brandès at Nîmes, Carlier at Strasbourg and Monaco, Rijvers at Saint-Etienne).

Czech football used to give two or three valubale elements like Karel (C.A.P), Finek (Saint-Etienne) and Jelinek (Toulouse). Bata-Zlin provided then three footballers combining the fineness and the efficiency : Dupal and Humpal (Sochaux), Michlovsky (Saint-Etienne). All three stood in France.

This gallery of players goes with the « investigation of the month » which is about to know what think the different actors of French football (presidents, coaches, players) about to re-open the boundaries to the foreign players, them which are closed since 1955 (the object of another post maybe...globlally, if not unanimously, they were 'for', under some conditions very often too, of course...by the way only two were against, the president of the federation and the coach of Racing Paris).
The following part is a last insert that features into this article. And it's about the foreign players who still play in France in 1960.

Like shagreen, the number of foreigners who are still performing into the French professional teams is decreasing before your very eyes. They are no more than 16. We cite here only the players formed abroad. Thus there is no question of the young nîmois Salaber born in Zaragoza, hence Spanish, but of French formation ! Who are these sixteen :
The Argentines Ruben BRAVO (Roubaix), MURO (Nancy), the Brazilian CONSTANTINO (Nîmes), the Austrians STOJASPAL (Troyes), KOMINEK (Lens), SCHINDLAUER (Nantes), MATZKY (Valenciennes) ; the Dutchmen VAN RHYN (Stade), RIJVERS (St-Etienne), CARLIER (Monaco) ; the Swiss man ESCHMANN (Stade) ; the Swedes BRODD (Toulouse) and JOHANSSON (Aix) ; the Uruguayan BESSONART (Metz) ; the Welsh GRIFFITHS (Béziers) ; the Luxemburger NURENBERG (Sochaux).
One remark : on these sixteen players, thirteen are forwards.

Then 6 players have their pic and a short or condensate description :

Pirès said CONSTANTINO (Nîmes)
A Brazilian who is a perfect technician and an ideal teammate yet.

Yngve BRODD (Toulouse)
A Swede who possesses a great liveliness in his runs and in his shots.

Santiago BESSONART (Uruguay)
An Uruguayan who starts to give his team his talents of dribbler.

Victor NURENBERG (Luxembourg)
A Luxemburger who won all the titles with Nice, before to move to Sochaux.

Kees RIJVERS (Saint-Etienne)
A Dutch man whose the wrongfoots and the glance have made and still make the heyday of Saint-Etienne.

Ruben BRAVO (Nice)
An Argentine who plays the teachers at CORT, after Nice, Aix, Grenoble and Rouen. 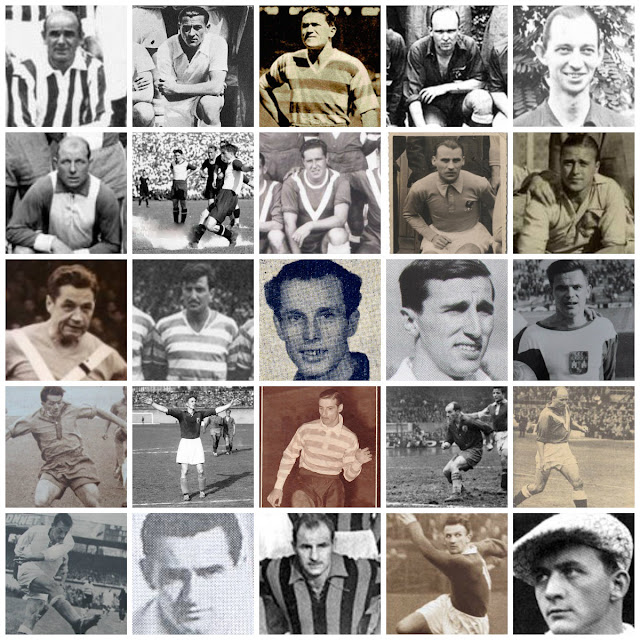 Some notes :
- The players who joined France during the Civil War in Spain were not cited by France Football and we mainly think about Valle, Luis and also his brother Joaquin, without really forgetting about the celebrities of the time Samitier and Zamora, all at OGC Nice. It was in a particulat context. Luis Valle stood longer and scored many goals for the red and black.
- The list is not exhaustive of course but the most important players have been cited (except for the Spanish who have migrated to France between 1936-37 and 1939, as seen previously). There was way more Yugoslavian and Hungarian players than that ! But as precised in the article many of them became French.
- It is not developped much into the « Frenches of import » paragraph but Pedro (or Pierre) Duhart was seen as an exquisite dribbler with his undelating moves but yet with much balance. This is what we can read in another article from the same issue which is about the « feinters ».
- By the way, the Paraguayan José Parodi joined his fellow country-man Andrada at Nîmes in the following season. It's an example, for the new ones who came in 61-62 along with "re-open borders". His name comes easily to mind as there has not been dozens of Paraguayan in the French league, even if a good number finally.
_A last point : Bradac was Czechoslovakian but was packed with the Hungarians in the article.

The different profiles for a same player complete each other and these articles were published around two years later so it must countain a couple of new foreigners who went to France after the 1959-1960 season.

Well, a last note : Oskar Rohr was the great-uncle of Gernot Rohr, the defensive midfielder formed at Bayern who made his career at Girondins de Bordeaux as a player then also as a coach for some periods of time which were the promotion in D1 in 1992 and the second half of the 1995-96 season with the UEFA Cup Final (against his very first club) and who has the double-nationality, German-French.